They increased prices twice, servers have gotten slower, CPU overages are unexplainable, support has gone downhill, and their cloud hosting is a ripoff. Worst of all, their community manager was made an admin of Facebook groups and it’s forbidden to talk bad about them (they have become cultish). After referring about 3,000 people, I no longer recommend them.

When you search SiteGround in Facebook Groups, it’s almost all complaints. At least the ones not moderated by Hristo, SiteGround’s community manager. I’m part of 20+ Facebook Groups – monitoring them and recommending “the best hosting” is why a lot of people come to his blog.

And it’s not SiteGround.

So if you want an honest SiteGround WordPress hosting review, you probably shouldn’t use them. SiteGround has gone downhill in recent years and better, faster options have become available. I personally migrated to DigitalOcean on Cloudways. SiteGround used to be good, but it’s 2020 and they are no longer the “good at everything” hosting company they were years ago.

They use it as a way to upgrade your plan but they never, ever, ever take accountability. When this happened to me, I went from $14.95/month GoGeek to $80/month cloud but was still getting CPU overages. Even after increasing CPU/RAM and paying $120/month, my website was still slow on SiteGround. And yes, I blocked bad bots, disabled heartbeat, and my website was at near or perfect 100% scores in all testing tools: GTmetrix, Pingdom, PageSpeed Insights.

This has been reported an endless amount of times in Facebook Groups.

But how many times has SiteGround managed to fix the problem? I couldn’t find anything.

This isn’t changing any time soon:

SiteGround has a slow TTFB.

Visit stgrndserver.com to see for yourself. This is a SG GrowBig account I setup to test TTFB and speeds across various tools, while also comparing them to 15 other hosting plans. All use the exact same environment: same Astra Starter Site, plugins, SSL, no cache plugin, no CDN.

For reference, cwdoserver.com is hosted on a $10/month Cloudways DigitalOcean plan. I encourage you to visit stgrndserver.com and compare them in terms of speed. Even just by clicking through the pages, you can see a clear difference. The admin area is also much faster.

Here’s what happened when I moved from SiteGround:

Plus, this has been reported many times in non-Hristo managed Facebook Groups:

You would think SiteGround’s move to Google Cloud would help, but apparently it hasn’t.

Will SiteGround increase prices again? Nobody knows, apparently not even SiteGround. But if you signed up for 2 or 3 years, don’t expect prices to be the same once renewal prices kick in. In fact, don’t count on anything to be the same with how many unwanted changes they’re making.

4. Renewal prices are way too high

When you pay for SiteGround, you only get the intro price for 1-3 years.

In case you can’t read it, it says:

The special initial price applies for the first invoice only. Once your initial term is over regular renewal prices apply.

The most frustrating part is they give 0 warning when something changes. And it changes a lot.

They have made it very clear. Don’t contact their support and keep upgrading your plan. SiteGround’s support used to be one of the best in the industry, but that completely changed.

It’s funny, back in 2018 when they increased prices and moved priority support from GrowBig to GoGeek, I had a hunch this was going to be a new era for SiteGround, and not in a good way.

I always thought the WordPress Speed Up Facebook Group was a great place for getting unbiased hosting opinions, until I saw Hristo (SiteGround community manager) was an admin.

Why is Hristo an admin for Facebook Groups? Come on admins, that is 100% corruption.

This explains why it’s basically forbidden to talk bad about SiteGround, especially their slow TTFB. Many respects to Gijo Varghese (admin of the WP Speed Matters Facebook Group) who called out SiteGround’s slow TTFB, but the admin called him a spammer and deleted the post.

It’s not just one instance; plenty of people have been banned from these Facebook Groups for simply addressing their concerns about SiteGround.

SiteGround was quick to replace cPanel with Site Tools once cPanel’s price increased.

The irony of this all… SiteGround does everything they can to increase their bottom line (replacing cPanel), but they expect customers to stay with them when they increase prices?

Some people like Site Tools, but a lot of people don’t.

Here’s a video by SiteGround in case you want to explore Site Tools: 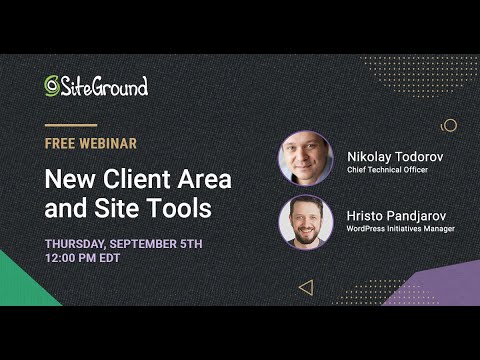 SiteGround’s CPU limits are designed to make you upgrade, but even if you upgrade to their $80/month cloud hosting, chances are you will still have CPU limit issues. This happened to me, as well as many other people in Facebook Groups. No matter how good or bad SiteGround’s starter plans are (StartUp, GrowBig, GoGeek), their cloud hosting is a total ripoff at $80/month, because you will probably need to upgrade CPU and RAM to $120+/month to avoid CPU issues.

9. No longer the highest rated host in Facebook polls

SiteGround used to be the highest rated host in many Facebook polls.

But if you look at recent polls, it’s usually Cloudways DigitalOcean, not SiteGround. I have been keeping track of Facebook polls for a long time and I can tell you this… there is a huge shift of people moving from SiteGround to other cloud providers that are faster, cheaper, and better.

10. SG Optimizer is copying everything from WP Rocket

Every update to SiteGround’s SG Optimizer plugin is basically copied from WP Rocket.

Heartbeat control, database cleanup, and prefetching external domains were all things I suggested to SiteGround to make their plugin more comparable to WP Rocket. Thanks for the credit Hristo! As long as you know you’re simply copying WP Rocket’s features, it’s all good.

11. Forcing customers to support the big G on Google Cloud

Without any warning, they migrated their customers to Google Cloud servers.

“But we have strict contracts” they say. “And we follow GDPR” they say. “Your information is still protected” they say. But they don’t give you a warning (let alone an option) to not use Google Cloud. For customers who care about privacy, this sudden announcement is a slap in the face for anyone trying to avoid big G. This isn’t what we signed up for, but we have no choice?

12. SiteGround’s Wikipedia author is closely related to the source

To add to the fishiness, the author of SiteGround’s Wikipedia page is related to the source, meaning a SiteGround employee is telling someone what to write, or are doing it themselves.

13. TrustPilot reviews are from customers directed from SG support

Most people writing SiteGround’s Trustpilot reviews are directed here by their support.

You can tell because of the amount of people mentioning how good their support is. This isn’t terrible (Hostinger actually hires employees to write fake reviews and pose as customers) but that’s why SiteGround’s TrustPilot reviews are good (4.7/5) and I wanted to give you a heads up.

14. Saying goodbye to SiteGround as a super affiliate

Well SiteGround, we’ve made a lot of money together over the years, but your company has gone completely downhill in so many ways and I honestly hope the near 3,000 customers I referred to you leave like I did. You are only interested in profits, and that is apparent when you ditched cPanel, increased prices, moved priority support to GoGeek instead of GrowBig, and enforced strict CPU limits to make people upgrade. Fix your issues and I’ll change this review.

15. Why I Left SiteGround for Cloudways

For me, Cloudways DigitalOcean was 2x faster and 2x cheaper.

There’s a huge shift of people moving from SiteGround to Cloudways in Facebook Groups.

Here’s the Facebook review in case you want to read (most hosts don’t even have Facebook reviews enabled, so I’m glad they’re transparent). Mustassam is the community manager for Cloudways and was great in helping me move (who is NOT an admin for any Facebook Groups).

Load times and TTFB are faster than ever.

If you want to try them, here’s a code that saves you money: OMM25 (or get started here).

Conclusion: A Weight Off My Shoulders

Well, I feel much better after writing this SiteGround WordPress hosting review.

I’m committed to making sure my readers are steered in the right direction and seriously appreciate everyone’s support over the years. Let me know what you think in the comments.

✅ Does SiteGround have a slow TTFB?

There have been complaints about SiteGround’s slow TTFB in Facebook Groups. Higher SiteGround plans include more server resources, but with their pricing, you will likely get a faster TTFB and pay less with other cloud providers.

✅ Why are SiteGround’s prices so high?

SiteGround increased prices twice, once in 2018 and once in 2020. They have also made numerous changes to cut costs and increase their bottom line, such as disabling live chat and moving priority support to GoGeek. SiteGround is simply trying to increase profits.

✅ How do I fix CPU usage limits on SiteGround?

Optimize your site in GTmetrix, disable WordPress heartbeat, and block bad bots from Wordfence. However, many times you can’t fix high CPU on SiteGround no matter how hard you try, and they will prompt you to upgrade while holding your website hostage.

✅ What happened to SiteGround’s good support?

SiteGround made a company-wide decision to increase profits even if it means worse service for customers. This is apparent by their ongoing actions.

Not a chance. The company is going downhill and the amount of complaints about them in Facebook Groups continue to increase.

Have a slow WordPress site? A slow WordPress website is usually caused by your infrastructure (hosting, page builder, theme, plugins). But it can also be from unoptimized images, fonts, and third party scripts. That’s why you should use tools like GTmetrix to pinpoint the exact reason your site is slow. This post you’re reading has…

GoDaddy is the slowest, most insecure, worst WordPress hosting you can possibly choose. Begin rant: They had a 2017ms server response time in tests and were in the top 2 malware hosting networks worldwide. SSL costs $63.99/year unless you use GoDaddy’s Ultimate plan. Their advertised prices only apply if you pay 3 years upfront and their dashboard…

When it comes to image optimization, you’ve probably heard enough about alt text. There are actually 20 different ways to optimize images (if you include both SEO and speed optimization). These will give you better scores in GTmetrix/Pingdom, potentially rank you higher in search, and make your content load much faster. I’ve managed to get…

Looking to add the best Cloudflare page rules for WordPress? Many of these page rules were taken directly from Cloudflare’s Page Rule YouTube tutorial. They can help you save bandwidth, improve security, bypass Cloudflare’s caching where it’s not needed (eg. your admin area), and even prevent spam bots from collecting your email address. You should get familiar with how…

Most people have Yoast, but few use it correctly. This tutorial breaks Yoast down into 3 key steps: configuring the Yoast settings, researching long-tail focus keywords, and on-page SEO (beyond green lights). I will also show you a few other ways to improve SEO related to Yoast like adding publish dates to increase CTRs, submitting your Yoast XML sitemap…

Need help finding better Yoast focus keywords? Researching Yoast focus keywords is done by selecting specific, long-tail keywords in tools like Google Autocomplete which have a nice balance of monthly searches and low competition. Google the keyword and review the top results to see the content you’re competing with. After that, it’s all about creating a…